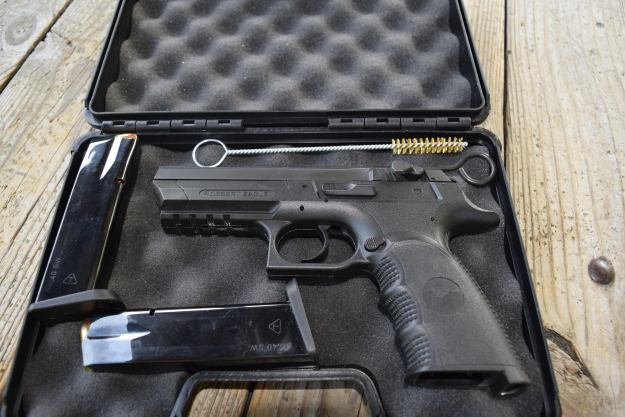 When you’re in the market for a new handgun, but want it to look like a classic, you have a few options. If you’ve always liked the look of the Magnum Research Desert Eagle, but couldn’t afford the price tag associated with actually owning one, look no further than the Baby DE III. It has the looks of its bigger brother, but comes with the affordability that you’re looking for, both in the gun itself, and the ammo sent downrange.

In fact, you can get this gun chambered in one of the popular three self-defense cartridges (9mm, .40 S&W, and .45  ACP), making it a great addition to your firearm family. You also get your pick of polymer or steel frame. The one Magnum Research sent out to me was a polymer framed gun chambered in .40 S&W. Honestly, not my first choice—but I take what I can get, especially when I get to hold onto a gun for several months with the opportunity to beat the snot out of it before having to send it back.

Baby Desert Eagle III is a quality firearm which performed flawlessly the entire time I had it, round after round. For much of my time with it, I used Blazer Brass ammunition, and am happy to report zero malfunctions. It fits well within my hand, and the 4.5 inch barrel helps to provide a little bit more weight up front. Unfortunately, the overall small stature of the slide itself is a bit troublesome for the firearm for a few reasons. While it is always nice to have a gun on your hip that doesn’t pull your trousers down, a gun that is too lightweight causes its own set of problems. Right off the bat, I had to make adjustments in how I pulled back the slide. Personally, I’m used to handguns with a meatier slide with positive serrations, and this Baby doesn’t really have much of either.

I noticed that, at first, I kept grabbing the slide and frame at the same time–which obviously won’t work. In order to pull the slide back to load a round into the chamber, the best method is to actually grip the slide and safety/decocker on the back end of the slide with your fingertips, while in the decocker is in the “fire” position. Otherwise, the slide is just too small to grab on to. While this is a pain, it is only a training issue that should subside with practice. After a short while, I got used to it. Furthermore, the overall light weight of this polymer-framed semi-automatic, increases the overall felt recoil of the firearm. Not a big deal for me, but for someone not used to firing, it could cause some issues. This is not a gun my wife would feel comfortable with shooting, because she’s relatively new to firearms—even though this is a full sized gun, with a 4.5 inch barrel.

What is the weight? The polymer framed version comes in at 28 ounces, while the steel one tips the scale at just under 38 ounces. I cannot speak of the felt recoil of the steel framed gun, but can imagine that it’d be better with the extra weight on top of it.

As for the ergonomics, I can only speak to the polymer framed pistols, which, as a side note, only come chambered in .40 S&W and 9mm. The steel framed pistol is different in that it doesn’t have finger cutouts on the grip, and is available in .45 ACP in addition to the others. Keep those things in mind if you feel like buying a Baby DE III after reading this review.

I have gorilla mits for hands, and the gun fits perfectly and feels right at home in them. The finger cutouts help, but I’m biased for this feature among polymer guns and almost always opt for them, rather than not. If they’re not your thing, make sure you stick with the steel framed version. When in hand, the gun shoots well and the DA/SA trigger is smooth, with an advertised 12 pound pull in DA, and four in single.

Over all, I’m pleased with this firearm. I had the pleasure of carrying it around concealed in one of my “universal” holsters and trusted it enough to go bang whenever needed for self-defense. If you’re in the market for a full-sized handgun that also has the ability to go full-ambidextrous (after the magazine release is switched), this is a great choice.

Just keep in mind that the recoil is more than you’d feel with other full-sized handguns, which won’t be a problem for most shooters.

You don’t get any bells and whistles with this one, just the hard case, cleaning gear, and two magazines. Speaking of the mags, you can get either 13 or 10 round mags, just in case you live in a state that sucks for gun laws. The Magnum Research Baby Desert Eagle III is a good option for a full size gun that is available in the popular three semi-auto self-defense rounds, and in either a polymer or steel frame. The model I tested retails for $646, with the steel guns going up in price from there.

Sound Off Gun Carriers! Have you ever shot a Baby DE III? How about one of its previous models? Let us know in the comments below, and make sure you subscribe to Gun Carrier’s YouTube Channel, so you don’t miss out on the video review, once it goes live.