These concealed carry facts aim to promote discipline and responsibility among gun owners.

A single thoughtless mistake can put you in a really bad situation if you’re not careful. Guns are dangerous if not treated with respect, but what’s more dangerous than the weapon itself is the person carrying it.

You gotta be in total control and avoid putting yourself in an unnecessary position that will force you to run out of options. The idea here is to use your weapon only to defend yourself. Firearm safety is our number one concern.

As a gun owner, I feel like it’s never enough to have a gun around to keep my family safe. Sometimes, things just happen that are beyond our control.

However, carrying a gun is never enough. Sometimes, carrying a gun can turn a bad situation around, or it can worsen things. This is why concealed carry has always been a hot topic for debate.

While there are benefits to hiding a gun within your person, there’s still the issue of personal safety. With that said, I’d be delighted to share a few concealed carry facts that may have been twisted.

I’m not going to start a debate here. Recent crimes about shooting have greatly influenced the public mind to the point of ignoring the needed results of implementing the right to carry guns.

Mass Killings Were Avoided with the Help of Armed Civilians

Numerous reports tell of civilians with concealed weapons saving the day against mass shootings. One incident in the Appalachian School of Law reported two men rushing to their vehicles to get their guns. They were able to prevent a mass murder from happening.

If you don’t think a gun is safe to carry around, then consider this Hoffman Richter Tactical Folding Knife.

What Is Tactical Knife? It is a knife designed for military or combat use. It is ideal for close-quarters or hand-to-hand fight.

A 19-year study proves that crimes involving guns are 10% higher in U.S. states with restrictive concealed carry laws. In Texas, crimes about murder, rape, and assault have dramatically dropped in the first two years after their CCW law passed. Shooting Incidents at Bars and Restaurants in Virginia Declined by 5.2% on its First Year of Allowing Concealed Weapons

Bars and other public places where alcohol is sold and people are drinking is where gun crimes are most likely to happen. Crimes involving guns at bars and restaurants in the whole state of Virginia decreased by 5.2%. 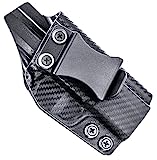 RELATED: Concealed Carry and Open Carry Come with Own Pros and Cons

Several cities all over the country in Pearl, Mississippi, Colorado Springs, Colorado and others have reports of mass shootings that were stopped by people with CCW permits. Even police officers believe this is the best remedy for preventing these types of violent crimes.

A lot of people have defended themselves using concealed weapons. This is the only possible way that people with physical disabilities are able to defend themselves from potential attackers. Stories told about there are more Americans who say no to CCW permits are false.

Reports about police officers disagreement about civilians with concealed weapons have no statistical basis. Can armed civilians prevent violent crimes? Policemen believe so, according to several sureys.

Watch this video by Civil Advantage of how a mass shooting at New Life Church in Colorado Springs was stopped by a legal gun owner:

It is natural for people to freak out when violent crimes about mass shootings surface the news or the internet. Yet we can’t simply ignore the many lives were saved due to the approval of concealed carry in a lot of States.

Do you believe that concealed carry can really prevent violent crimes? Share us your thoughts in the comments section below!

Editor’s Note: This post was originally published on January 9, 2017, and has been updated for quality and relevancy.