The AK47 3-Magazine Shingle by Beez Combat Systems is a low profile magazine shingle that allows for complete maneuverability and access to magazines without disturbing your rifle sling. The shingle comfortably holds 3 AK47 rifle magazines with a 30 round capacity and is complete with bungees designed to secure each magazine in order to reduce unnecessary movement while out in the field. This product ensures freedom of movement even when your AK47 is slung across your shoulder. Image via akfiles.com

The AK47 Magazine Shingle is available in almost every color imaginable from Coyote Tan  to Red. Whether you are active duty military personnel, law enforcement, or just updating your personal protection gear, this magazine shingle can be tailored to your specific color preference even in the latest Kryptek. 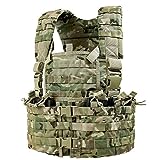 The low profile design on the AK47 3-Magazine Shingle is the first and most important advantage over other magazine shingle designs. The open top allows for easy access to your magazines without the hassle of losing grip on your rifle while reloading. Reloading a rifle can be easily done with your free hand while in a training exercise or real world combat scenario with this magazine shingle. As well as the 2” Velcro enclosure located just behind the magazine slots is important note. This enclosure is large enough to hold personal items such as a wallet and is even large enough to squeeze in an additional magazine.

The last advantage of the AK47 3-Magazine Shingle by Beez Combat Systems is that it is manufactured and produced in the United States. This advantage ensures American craftsmanship while maintaining American jobs and supporting the economy. Beez Combat Systems is located in Salt Lake City, Utah and can ship anywhere in the United States within just a few business days. 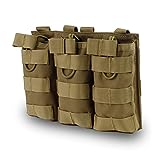 The AK47 3-Magazine Shingle can be easily set up via MOLLE straps or malice straps. Preferably this magazine shingle should be placed on the front of a plate carrier as to compensate for easy access and maneuverability however, the user is free to use their discretion. Once the magazine shingle is attached and secured be sure to insert and remove AK47 magazines several times over in order to properly adjust the bungee tie-downs and to break in the shingle to your specific movements of reloading.

To see the AK47 3-Magazine Shingle in action, check out the video below:

Want to know more? Check out these related articles:

Choosing the Best Guns and Ammo for your Arsenal